Cartoons have ridiculed and satirized fashion’s trends and fads and some of its more extreme styles for centuries, from editorial pages to popular comic strips. In partnership with the Billy Ireland Cartoon Library and Museum, this exhibition highlights select fads, trends, and innovations from the 19th century through the 1970s, pairing examples of the clothing itself with the comic strips, cartoons, paper-dolls, and comic books in which these styles appeared. The exhibit opened November 4, 2017 at the Billy Ireland Cartoon Library and Museum and ran through April 21, 2018.

This exhibition celebrates the fashion arts of Christian Dior in recognition of the 70th anniversary of his post WWII “New Look”. Featured garments include ball gowns, daywear and suits exclusively from Ohio museums or worn by Ohio women. In addition to Diors from our collection, are evening gowns and day dresses worn by Elizabeth Parke Firestone of Akron from The Henry Ford Museum as well as the Western Reserve Historical Society, which is also lending day and evening wear belonging to Mary Peters Bolton from Lancaster and Cleveland. Kent State University Museum is also lending garments, and other Ohio women represented in the exhibition include Dorothy Peters from Lancaster and Marilyn Maxwell from Cincinnati among others. See exhibit installation images on our fashion2fiber website. 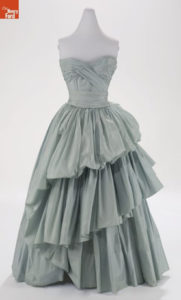 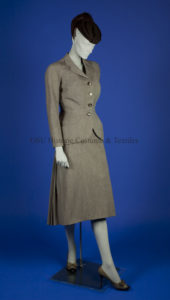 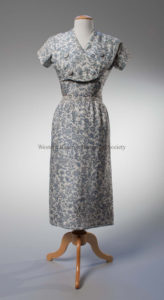 The Historic Costume & Textiles Collection celebrates the winter into spring months of Spring Semester with an exhibition of the garments that help keep us warm and dry. “All Wrapped Up,” is a history of fashion in the shape of capes, coats, and cloaks. Luxurious evening wraps share space with iconic trench coats and other functional and fun outer garments that are used for protective and decorative purposes alike. Examples of both men’s and women’s outerwear are featured. See exhibit installation images on our fashion2fiber website. 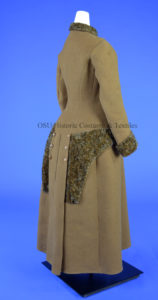 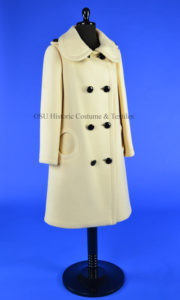 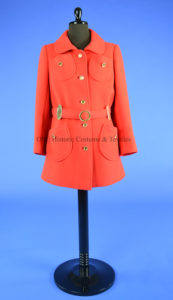 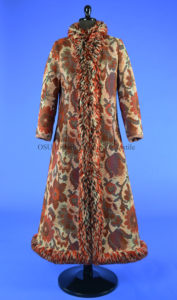 …but please visit us this fall for our upcoming show,

Red and blue are the colors of our states during election season, so we’ve decided to explore those colors in our fall exhibition, Red or Blue? Join us this election season as we delve into the cultural meanings and psychology of the colors of the season, and view some of our best examples of red and blue gowns, suits and dresses from various decades of the twentieth century.

The Historic Costume & Textiles Collection is featuring some of its best examples of red and blue in its latest exhibition. These colors first were used in television election coverage in 1976, although at that time, neither color was ‘assigned’ to one political party. In addition to political affiliations, cultural meanings of red and blue also have shifted over time, having different meanings in the past than they do today. We will look into these meanings as well as the natural dye sources for these colors. Approximately thirty garments will be on display in the upper Gladys Keller Snowden gallery in Campbell Hall, including designer evening gowns, daywear and suits. Related materials will be in the lower gallery.

View images from the exhibition

Check out the digital exhibition on Fashion2Fiber