And the Bride wore… is the title of our next exhibition offering, opening September 17th with a Friends preview, of course. The exhibition will have two installations, one during Fall semester, and the second in Spring semester so we can maximize the number of dresses to display in our upper gallery space. In addition, the Global Gallery @ OSU student retail store is planning a Fair Trade wedding boutique in the lower gallery space to accompany our exhibition.

The exhibition is organized around several themes, instead of being a strict timeline of wedding gown fashions, but will still feature dresses from the 1880s through the end of the 20th century and possibly into the 21st. All have interesting stories which accompany them. The themes include, “Something Old” and “Something New” which are pretty self-explanatory, “Something Borrowed”—a dress borrowed or re-cycled from a previous bride, “Something Blue”—a non-white wedding gown, “Generations”—more than one generation of brides in a family, “War Brides”—dresses worn around various war times, and “Local Interest”—dresses with stories and connections local to Columbus and Ohio. Each installation will feature 15-16 gowns and all thematic areas.

Please contact us if you have questions about our exhibitions and programs.

View images from this exhibition.
This is an exhibition showcasing a grant project funded by the Institute of Museum and Library Services. The grant helped support the digital photography of artifacts that could be used to teach history in accordance with Ohio’s curriculum for grades 8-12, and offer workshops to teachers to provide them with information and resources to create lesson plans using the digital images. The exhibition will feature five history lesson areas: Early American Republic 1770s-1820, Civil War, turn of the century consumerism, the Great Depression and WWII and 1960-70s innovation. Wireless access to the museum’s Fashion2fiber website will be available in the gallery via ipads and personal devices to retrieve information regarding artifacts not included in the exhibition due to space.  http://fashion2fiber.osu.edu

From Urban to Rural

The Columbus Fashion Story, explores the history of fashion as it relates to Columbus’ bicentennial history and its fashion industries. Two of retail fashion’s industry giants had their beginnings in Columbus, Ohio–Federated Department Stores in 1851 as S. Lazarus, and Limited Brands Inc. in 1963 as The Limited store in the Kingsdale shopping center. Both began modestly and eventually gained nation-wide recognition.

END_OF_DOCUMENT_TOKEN_TO_BE_REPLACED 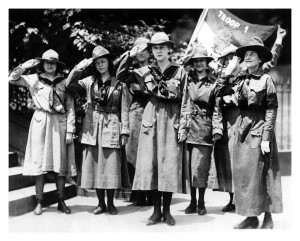 What do American fashion designers Bill Blass, Halston and Mainbocher have in common with the Girl Scouts of America? Their uniforms of course! While on first appearance one might not consider a uniform to be a garment that makes a fashion statement, Girl Scout uniforms do reflect historical American fashion trends. Not only do the uniforms reflect fashion throughout their 100 year history, the Girl Scouts organization actively partnered with leading names in the fashion industry to design and create their uniforms. This exhibition showcases these partnerships.

END_OF_DOCUMENT_TOKEN_TO_BE_REPLACED Trade is one of those English words with many meanings. It can be a verb as in “to make an exchange” or “to buy and sell.” As a noun trade can indicate a skill or craft, or it can refer to an entire industry such as when the fashion industry is referred to as “the rag trade.”

Global Textile Trades explores all these aspects of trade from the craft of creating cloth from fibers and yarns to the skill of decorating that cloth through patterns of weaving, dyeing and embroidery techniques. Trade as exchange happens not only in the buying and selling of goods, but also in the exchange of cultural aesthetics and ideas. The international trade in textile products over the past several hundred years is evident in Indian influence in the textiles of Southeast Asia and Europe, and European influence in the textiles of Asia and Africa.